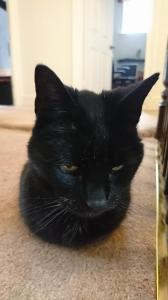 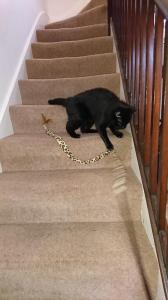 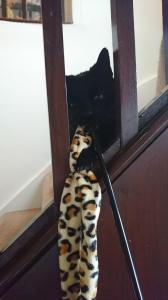 The start of 2017 was not really very exciting and there  wasn’t much interesting to write about – hence the dearth of new posts.

There were the work tasks: I’m trying to cut my business costs this year and therefore replaced my IP database at the start of January (which included a couple of on-line training sessions in January/February), I met with an old colleague from my previous employer, ostensibly to talk about possible IP protection for some new ideas that he had been tinkering around with, but ended up having a general chat about how the atmosphere has changed as have many of the people. I also did quite a few professional webinars (always good for my CPD).

On the MS/medical front: There were all the usual things – open gym sessions (Monday & Friday), seated yoga (Wednesday), dentist etc., but there were 2 things that did stand out as not being the norm:

1.  On the afternoon of 04 January 2017 – we took delivery of my “super duper” assisted bike which Kevin had arranged as my Christmas treat. We are hiring it for 3 months on a trial basis and I’m trying to use it every day. At the end of the 3 months, we will purchase it and the 3 months hire cost will be deducted from the sale price. This just goes to show you how expensive it is!

2.  During the last weekend in January, I hosted the “Twitter takeover” on behalf of Shift MS. This might have been quite mundane, but of course in the US there was all the chatter about the election/inauguration of Donald Trump as president of the USA. Fortunately, most of the tweets during my “Twitter takeover” steered well clear of politics!

Unfortunately, this fairly lacklustre spell of progress or rather complete lack of it, gave me the urge to organise several things – another visit with my MP (much shorter and more friendly this time), organising a visit from a carpenter to quote for changes to our stairs and levelling our upper landing and also a visit from a blinds company to quote for installation of electrically controlled blinds in our bedroom. Kevin was NOT pleased, although I have to admit that this flurry of activity was taking place just before my parents were coming to stay with us for a couple of days prior to going on a bell-ringing trip to Devon with a view of their friends from Somerset.

Roll on March: As I’m in bad odour with Kevin anyway, and things still aren’t progressing with the new house, I also arrange for a visit from a landscape gardener to quote for cleaning our block paving area and replacing the paving slabs/edging along the path to our front door. A very nice, young chap (I’m getting to that age when lots of competent adults look ‘young’ to me now) came to visit us, see what was required and provide a quote for the work. My main aim was to get the path to the front door level (making it easier to manoeuvre my wheelchair) and to replace the edging along the path to restrain the gravel between the plants in the adjacent beds, which was spilling onto the path in several places due to accidental hits & bumps from me in the wheelchair. The Gardener said that he could, and would prefer, to do the work before the end of March. In fact, he could start the following week.”Ah, that’s difficult” I said, “because we are off to visit my patents in France next Tuesday and don’t return until 22nd March”. (Mmm, now I’m beginning to appreciate Kevin’s frustration – but I wasn’t going to admit it and he could jolly well sort out arrangements for feeding the cat while we’re away … SULK!) Anyway, the Gardener agreed to start on our return from France and right at the last moment, Kevin organised for a “professional cat sitter” to come in and feed the cat, while we were away.  …

AND SO, OFF WE GO TO FRANCE … (Garden photos courtesy of my Dad) 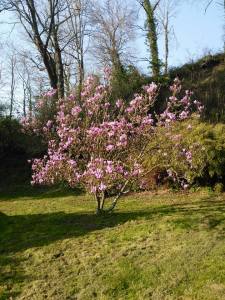 Now my Mum had warned me that on 17 March (St Patrick’s day) they were hosting a celebratory Irish meal and had invited a number of guests – both French and English. We had already seen the Irish flag and bunting as it was ordered on-line and had been delivered to our house a few weeks earlier, and we had been treated to a viewing of their cheap elf T-shirts (picked up in a supermarket during their quick bell-ringing trip to England). The authenticity of the “Irish food” was somewhat dubious, but they had made several attempts to try out the cocktail ‘Black Velvet’ (a mixture of Guinness & Champagne) – now that was sure to go down well in France (!?!) The verdict on the ‘Black Velvet’ was understandably somewhat confused, ranging from “a good way to ruin both Guinness & Champagne” (majority) to “it’s quite nice really” (minority).

I don’t drink much alcohol and definitely avoided the ‘Black Velvet’, but I think the next two photographs go to show what a terrible effect it can have on the photographer (my dad).

I leave it to you to make up your own mind!

My parents had set up an office for me in their spare, spare bedroom and I did spend a couple of hours each day at my computer doing some work! There was some socialising, relaxing, watching films and shopping too and it did provide a nice break for us humans. And now onto the cat: He seemed to have a pretty relaxed and fun holiday too, being well looked after by the “professional cat sitter” as can be seen from the pictures at the beginning of this post and the photographs to end. We shall definitely be using her again for our next holiday – Birthday celebrations! 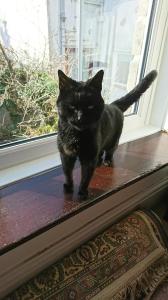