Now after a dreadful end (September, October & first half of November) to 2017 – note: December & Christmas not included – I didn’t really feel in the mood to write another blog post until now. The run up to Christmas was busy (particularly for Kevin, who painted the large expanse of blank wall in our bedroom – it’s blue again, just like in our old house). We also ordered and hung lovely lined curtains at the windows in the bedroom, which have been bare up to now and Kevin finished the strip at the base of the skirting, covering the expansion gap left around the wooden flooring.

So now, as Christmas was being held at our house again (because of aforesaid bad few months just preceding the festivities), we could start on the Christmas preparations – tree, decorations, presents etc. After all it was still only mid-December and last year we hadn’t even managed to buy a Christmas tree until 23 December ! I’m afraid I don’t have any pictures of the Christmas tree/decorations etc. – we were having too much fun. My parents were staying with us (apart from a couple of days when they visited some old friends, one of whom was recovering from an operation). Kevin’s parents and sister came over to visit for a lovely meal on Boxing Day and unfortunately, there is photographic evidence (see below). 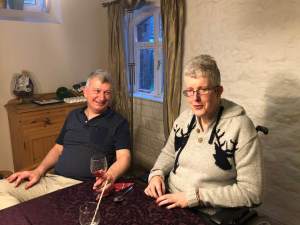 (Gosh I hate photos of myself, but Kevin’s sister has the right idea because she doesn’t appear in any of the photos – taking on the photographer’s role.)

Then we had a visit from my cousin Jeff and his wife for an evening meal again, but fortunately/unfortunately there are no photographs to immortalise that event. So, Christmas & New Year 2018 went much better than expected and our cat was really lovely and friendly to everyone, which I guess is a nice way to remember him (see previous post, where it all went rapidly downhill during the first few weeks of January and we were forced to have him put down at the vets – see previous post.)